I had an amazing, beautiful Mother’s Day.  I ran with a dear friend.  My daughter made me a sweet card and gave me some yarn so I can make her a hat for when she goes to sleep away camp.  She picked out not-itchy yarn to guarantee she will wear it.

I spent a few blissful hours alone before my mom and I had our traditional buy flowers until the car is full then buy some more shopping trip.  This is a picture of her car before our last stop where we bought three more flats of plants.  (She had one on her lap and one under her feet by the end.)  We decided our million dollar idea is to build a double-deck car plant stand.

We went back to my house, unloaded the car, and picked up my daughter.  Then after a quick visit with the grandparents little Afthead and I headed home.  I cooked dinner, and we enjoyed our evening as a family.  There was a card on the dining room table with my name on it.  At bedtime I said, “I’m going to open this card from Daddy and then let’s get ready for bed.”

Daddy said, “Oh, that’s not from me.  It’s from my brother and sister-in-law.”

My head explodes.  My husband and I have this fight at least once a year.  We’ve had it on Mother’s Day, my birthday, Valentine’s Day and our anniversary.  He has a variety of lame excuses such as he didn’t know he was supposed to buy me a card or he forgot or whatever, but at least once a year he totally ruins a holiday for me.  I know it’s going to happen, so I’m mad at myself for letting it bother me, but I feel like I’ve given up so much.  I don’t expect a present.  I don’t expect flowers (because I have plenty, thanks.)  I don’t want chocolate.  I don’t expect breakfast in bed.  I expect a card which is available at any grocery store, card store, book store, and even most convenience stores.  When you can’t even bother to get me a card it’s like a giant middle finger raised with a “you don’t matter at all” tacked on top.  My husband knows this.  I am not a shrinking violet when he forgets the card. We have been together for twenty years, but this year I gave up.  He is never going to remember the damn card.

I went to bed furious at myself for letting him ruin my great day and at him for forgetting the card, again.  I made plans to run off with the cute lifeguard at the pool, or the cute bagel store guy, but when I woke up I tossed those ideas and solved the problem: I went to Target and bought my own cards.  There was one decent Mother’s Day card left, so I got that.  I picked up 4 birthday cards, a few generic “I love you cards” appropriate for Valentine’s Day, our anniversary, or just because he loves me. I bought some “I’m Sorry” cards, because he really freaking needs those.  I got some blank cards.  The Target bag was full of cards, and when I got home I handed them to him explaining that if he couldn’t even manage to open a drawer and sort through these cards I really would kill him. 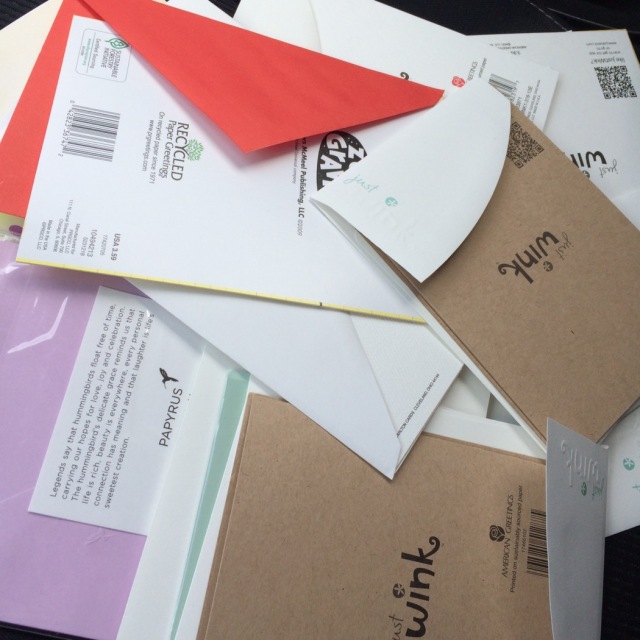 He wasn’t offended.  My husband is aware of his shortcomings, but he was smart enough to have a card of his own waiting for me.  A “thank you” card because he figured that was what he should have said on Mother’s Day, and because the grocery store was out of Mother’s Day cards.  I may have to pick up a few more “thank you” cards for him.  It was a nice sentiment.