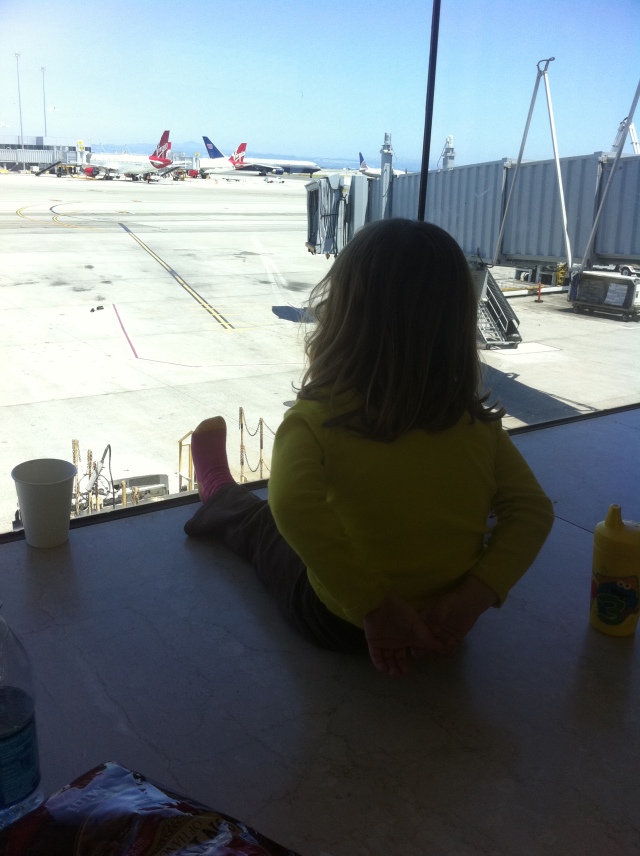 Traveling with an infant is uncertain and scary, and traveling with a toddler is just like that, but louder and more mobile.  There’s less screaming for no reason and more, “Want down now!  Now!  Now!” followed by the toddler death screech.  These are the children holding their parents hands walking up and down and up and down the aisle whenever the fasten seat belt light is off.  In my opinion, toddlers are the hardest travel companions.

Melissa, from Parenthood and Passports echoed my thoughts in her comments on my infant post, “The infant days were much easier than the toddler days, I have come to realize.”  She’s so right! (Check out her site if you travel with kids or travel at all!  It’s a fun read.)

How do you travel with a toddler and keep your sanity?  Let’s start with the no/low-cost suggestions:

Talk about the airport ahead of time

Make your toddler aware of the whole flying process.  Talk about the security lines and sending the suitcase off when you check it.  Explain where all their stuff is going, so you can remind them as you go through the process.  “Now remember, this is when blankie goes in your bag and through the x-ray.  Then we’ll go under the bridge.  First you, then Mommy next.”

If you grouch and gripe it doesn’t help, but the airport is filled with amazing things. Notice them with your toddler.  “Don’t the security policemen have cool blue uniforms?”  “You are so special!  You don’t have to take your shoes off!”  “Do you see our bags going on the plane yet?”

Make others like your kid before they become obnoxious

Teach your kid the three rules of flying before you go, repeating them over and over.

Have your kid repeat these rules as soon as you get on the plane.   Point the lights out.  Explain what the seatbelt rule is and that it is not your rule, it is the plane’s rule.  It won’t end the “I WANT TO GET UP!” tantrum, but it will provide a way to explain without it being your fault.  Also, fellow passengers will appreciate hearing that if their seat starts being kicked endlessly by little feet you are their ally.  The smoking thing is just funny.  Trust me, a three-year old saying the third rule is “No smoking!” is hysterical.

Finally, teach your kid that take-off is called “blast-off.”  Nothing is cuter than a tiny voice shouting, “Mommy?!?!  Is this the blast off?!?!”  Your kid is adorable.  All toddlers are.  (If kids came out at 18 months old and potty trained I’d have a dozen.)  Let their cuteness shine through before it gets tarnished by hours in the plane.

You love the chance to try exotic foods prepared in local styles when you travel.  Your toddler does not.  On the plane bring their favorite cup, and fill it with their favorite drink after you get through security.  Bring bags of their favorite foods.  Slip in a treat or two that they don’t often get to eat.  My kiddo was a pacifier blankie loving toddler, so she got her pacifier and blanket the entire flight.  She also had a sippy cup of juice, sliced apples, and goldfish.  When she wanted a treat she got a ring pop: the pacifier in lollipop form.  Throw away your rotting teeth and nutritious food worries for the duration of the flight.  Make it a comfortable, special smorgasbord.

Now, if you are lucky enough to have a little extra money to spend there are some higher cost things you can do to make your trip more enjoyable.

Devices and television are your friend

Sure, if you are lucky, your toddler will fall asleep when the plane takes off, but if you aren’t lucky it’s okay to ruin their brains with TV on a phone or tablet while they rot their teeth with treats.  It’s a vacation!  Fun fun!  Also, sometimes there are built-in televisions on a plane that cost a bit to purchase.  Trust me, if you only buy one TV, it’s better to get Disney and Nickelodeon for your kid than HGTV for yourself. Invest in some over the head folding headphones for your toddler.  They won’t be able to keep the earbuds in their ears, and you risk a “I CAN’T HEAR!” tantrum.

Get them their own seat

I know travel can be expensive but if you are traveling solo with your toddler it helps to have an extra seat and an extra under the seat.  I used to travel with my daughter’s carseat because her seat was a familiar space for her.  Also, she was a great car sleeper, and often that translated to a plane sleeper if she was in her own seat.  From a safety perspective, it was easier to ensure she was belted in if she was in her carseat.  That said, try hauling your gear, your kid’s gear, your kid and a carseat sometime.  I had wheels I could put on my carseat, but I have vivid memories of me wearing a backpack, pulling my roller bag – with her bag strapped to it – and carseat on wheels while balancing my daughter on my shoulders walking out of baggage claim.  I swear, I must have grown two extra arms to pull that off.

One thing to know, if you do travel with a carseat make sure it is approved for flight by the FAA and that you put the seat in a window seat.  Those two steps will save you embarrassment and the attention of angry flight attendants.

If you don’t splurge for the extra seat, try splurging for extra legroom.  My daughter spent many hours on the floor of the plane playing between my feet.  Yes, it is filthy.  Yes, you risk the little one eating some random dropped food.  Yes, it’s amazing to get your child off your lap and get a little space during a long flight.

There is one thing you must do if you are traveling with a toddler, and it will cost you nothing.

Rely on the kindness of strangers

People will be jerks and mutter nasty things under their breath.  People will recline their seats so your kid can’t see the TV.  You can get yourself all bent out of shape, or you can look for the kind smile from the lady across the aisle who has been in your seat.  You can marvel over the car rental person who, when you were returning your car, noticed the toddler in the back and says, “Get in the passenger seat, I’ll drive you to departures.”  There will be an uppity business man who talks Dinosaur Train with your kiddo the third time she launches Buddy at his head.  Turns out he’s a dad under that suit.  I remember the awful flight to Orlando in generalities, but six years later I remember the specifics of the people who were wonderful to me and my challenging, adorable, loud toddler.

The second in a series of Kiddo Travel Hacks where I share my best advice for not just surviving, but enjoying travels with kids.