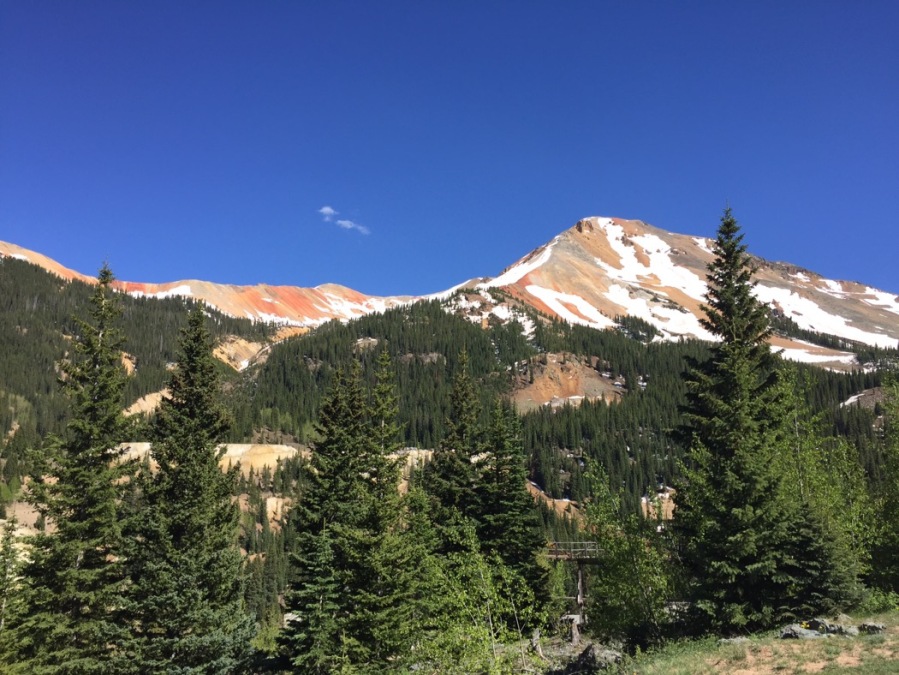 Damp and smelling of hot springs we made our way to the concert in the park.  Music and a sno-cone tent had lured us away from the warm pool.  My daughter and I were both overdressed for the weather in our jackets, but underdressed in our lack of underwear and shirts.  We had decided that wearing our swim suits under our clothes would just be “too soggy” for the rapidly cooling evening.  My husband’s damp swim trunks looked enough like shorts that he blended in. The band we didn’t know played music we did know.  We swayed to the music at the edge of the crowd while my daughter attacked her bright blue dessert.

Ouray is a mountain town, and there were distinct groupings of tourists in their “Ouray” and “Colorado” souvenir clothing and locals in their Patagonia, Mountain Hardware, and skinny jeans.  Tourists were not wearing skinny jeans, because no fabric is flexible enough to allow for anything beyond breathing in those jeans: completely impractical for anything but standing and looking cool.  Sprinkled between the tourists and locals were the traditional concert-in-the-park attendees.  The requisite braless old lady, somewhere between 45 and 95, hula hooped in the front row.  She briefly attracted attention of many wondering if her breasts would be exposed during her gyrations, even though no one really wanted to see them.

My daughter was marveling, “Why doesn’t everyone give straws and spoons with snow cones?” when I noticed a woman weaving her way through the crowd.  Well, I actually noticed her coat.  I am a coat aficionado and this was a spectacular specimen.  It hit her mid-thigh and was made out of some chamois colored leather or perhaps waxed canvas.  The material had a slight sheen and accentuated her ordinary movements as she nodded at this person and hugged that one.  In the fading sunset her coat glowed and looked so soft that I longed to touch it.  Laughing, she tossed her head and her long earrings sparkled beneath her asymmetrical black pixie hair.  It wasn’t a haircut in response to aging or motherhood, but just the haircut she should have.  When she bent to swoop up her son I noticed her jeans – not skinny like the cool people – but soft, medium blue, body skimming, practical and perfect.  They just brushed the top of her bare feet as she stood, cradling her boy on her hip.

She was beautiful.  It wasn’t that she was thin.  It wasn’t that she was well dressed.  She was both of those, but what made her beautiful was that she was impeccably herself and she was fully and completely present in the space she occupied.  I wasn’t the only person who noticed her, although I may have been the most intent observer.  As she would stop to talk to a group you could see the people nearby pausing in anticipation of her arrival.  When she left a group they would watch her go before resuming their conversations.  It was as if a spotlight followed her and the crowed brightened where she was.  She was magnetic.  I could spot her in an instant either due to her personality or the ebbs and flows of the crowd dynamics moving around her.

Never close enough to make eye contact or to be graced with a smile, I left without meeting this woman.  As I closed my eyes to sleep that night I imagined a life for her.  She owned a little boutique shop in Telluride.  She lived in Ouray in a house she inherited from her grandmother, and she loved the quaint mountain town.  However, as a savvy businesswoman, she knew the real money stayed in Telluride, the richer of the sister towns.  Every year women traveled from all over the world to spend thousands in a single shopping trip so they could look “just like her.”  She catered to them, fawned over them, impeccably dressed them, and under her attention they became beautiful.  Huge packages would arrive at their homes containing entire new wardrobes selected by her hand.  The rich women would take out each item and lovingly remember how they felt that day in Telluride.  Unfortunately, none of them could capture the same confidence they felt in the shop, because the shop owner didn’t come with the clothes she sold.  The memory of beauty didn’t wane so those wealthy women would return year after year to rekindle the feeling, and every year they found it under her gaze.

I fell asleep wishing I could travel to Telluride and wondering what coat she would select for me.