Today would have been my Grandpa’s 103rd birthday.  A few years ago my mom uttered this infamous – in our family – statement, “It makes me feel better knowing that if grandpa was alive he’d be dead by now.”  She’s right.  If my grandparents weren’t dead already they’d probably be dead by now, but the week bracketed by their birthdays is still one that pulls at my heartstrings.

Adding to the angst this year is that we finally got rid of their recliner.  When my grandma died, I inherited this gem.  I was poor, just out of college, and furnishing my first apartments and home.  Somewhere in there Grandpa’s recliner became mine.  I didn’t care what it looked like because I just wanted a comfy place to sit. 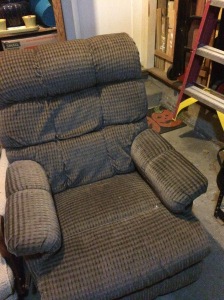 Now the recliner has lived with me 16 years, which is longer than it ever lived with my grandparents. The chair has seen me and my boyfriend turned husband through innumerable head colds and bouts of bronchitis: nothing is better than a recliner when you are stuffed up and coughing.  My daughter has spit up, peed, pooped spilled, and snotted on this chair.  Throughout her infancy breast-milk was leaked all over it because I loved nursing in this chair.

When our basement construction started, heralding the end of the recliner’s life in the house, the baby chickens pooped on it while my daughter sang lullabies to them in the garage.  I hand medicated little baby Rosie chick in that chair.  There may or may not be mice in the chair because there are mice out there.

The time for the chair to leave our home had come.  No more would my daughter recline the back, extend the footrest and launch herself off her indoor playset.  Finally I could stop worrying which kid-friend would end up with stitches from emulating my daughter’s antics.  We will never figure out where that missing thumb screw goes: the one that fell out of the bottom one recline. I’m sure there is a whole set of knitting needles and stitch markers hidden in there, never to be found.

Before putting the chair out to the curb I went out to the garage, curled up, and read in it one last time.  The book was A Man Called Ove, a perfect choice because my grandpa could have been named Ove he was so much like that character.  I read, I cried, I remembered, and I watched my cats stalk spiders and mice.  Finally, I turned off the lights and, like a dope, said “Goodbye chair.”  By the time I got home from work the next day it was gone.  My mom said, “It was an awfully big memento,” and it was. 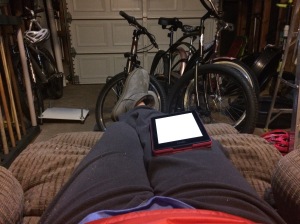 The first post-chair evening I was down in my study digging around in my sewing machine cabinet and for a moment I smelled cigarette smoke.  Throughout my childhood my grandparents were both smokers and that scent still calls up memories of them.  At that moment I realized that one of them was reminding me that my sewing machine belonged to my grandma.  I remember sewing Halloween and theater costumes side by side.  I still use her manual, filled with her hand written notes, every  time I need to sew on rickrack.  I still have a big memento and one that isn’t going anywhere.  All I need to do to reconnect to them is sew something and, you know, my husband did just mention that the chicken coop needs curtains.  (Well he actually said “The chicken coop needs window blankets,” but either way it means sewing project.)

I misquoted my mother in the original version.  She did not say, “It makes me feel better knowing that if grandpa wasn’t already dead he’d be dead by now.”  The corrected, and even sillier, quote is above.  Thanks mom for pointing out my mistake.  Love you!

7 thoughts on “The Recliner”

My office lighting is really excellent.
There went July. Minnesota fun, lots of basketball, lonely pets, and a family reunion. It’s feeling like we should hunker down again, but maybe this reprieve from the pandemic will recharge our souls.