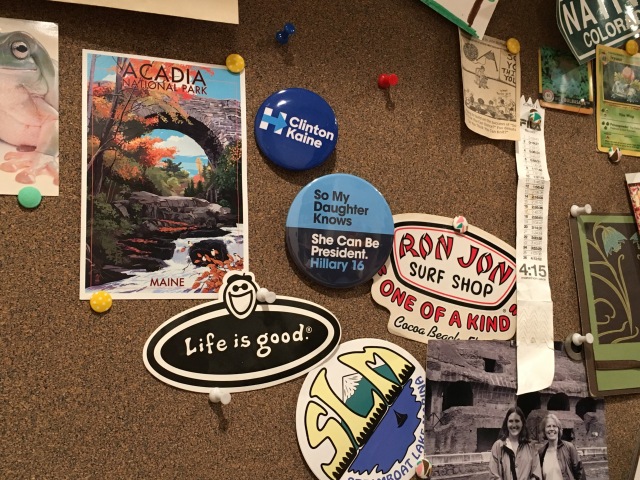 February 3, 1870.  That’s when the fifteenth amendment stipulated that
“The right of citizens of the United States to vote shall not be denied or abridged by the United States or by any State on account of race, color, or previous condition of servitude.”

To be clear, all men regardless of race or color had the right to vote.  It would be over 50 years before women of any race or color could vote.

August 18, 1920. That’s when women received the right to vote in this country. My grandmother-in-law, who turned 100 this year, was born when women couldn’t vote. A woman with whom I spend my holidays had a mother who could not vote in the first election of her daughter’s life.  I find this unfathomable.

Never in my life have I questioned my worth when compared to my male counterparts, and I am grateful for that.  Along the way key points of the women’s intelligence dogma missed me.   Somehow I managed to excel in reading and writing AND math and science.  Girls are bad at math and science?  Who knew?  In 3rd or 4th grade I made the gifted and talented program in English, but not in math, which I found unacceptable.  Whatever stipulation the school set I must have accomplished, because I was in both the math and English G&T program from then on.  I scored a perfectly even 650 math and 650 English score on my SAT.  After high school I received scholarship offers for acting and engineering programs, and went the engineering route. My class ratio started at 8 men to every woman, but I never thought I shouldn’t be in an engineering college; I just found it really easy to find a date on Saturday nights.  After getting my degree I went to work for a big management consulting shop and picked the most challenging technical track I could find, without ever thinking if a girl belonged in that role.  Now, 20 years into my career I lead a team that is half women and half men and not a day goes by when I question if one of my male colleagues is better at his job than I am, because they are not.  We may have different skills and strengths, but they are not better.  My husband, as I have mentioned before, has had the same career duration as me and we make exactly the same amount of money.  My life is a symbol of the equality between men and women, and until recently I believed with all my heart and soul that gender equality was a reachable goal for this country.

In 2008 I held my baby girl and marveled that Barack Obama, a black man I voted for after caucusing for Hillary Clinton, was elected as president.  So much social change has been catalyzed during his 8 years in office.  Why shouldn’t the barrier of a female commander in chief be the next to fall?  In my mind it was a foregone conclusion, so I sobbed on Election Day when my dream of celebrating President Hillary Clinton’s win with my little girl evaporated.  How did a highly qualified woman lose to a man who has never served a day in office?  I don’t want my daughter live in a world where boys are just assumed to be better leaders than girls, because I have never lived in that world.  How dare this election destroy my 42 years of proof that men and women can be equal in this country?

Misogynist is being thrown around everywhere and peppers casual conversation in my circles.  Misogyny, according to the old hardback Merriam Webster Dictionary on my desk,  means the hatred of, contempt for, or prejudice against women or girls.  Filled with vitriol the word is spat meaning the first two words, but my fear is that it’s really the third.  Hatred and contempt could be focused on a single candidate or person.  It could mean that Hillary Clinton and her actions kept her from becoming elected.  However, I am terrified that the real problem is that the 48% of voters are actually prejudiced against my gender.  That is a much bigger wall separating women from the presidency, because that isn’t a candidate problem it’s a cultural issue.  My fear is that somehow outside of my bubble lives a country that still thinks women should be seen and not heard, honor their husband and father, and stay barefoot and pregnant in the kitchen.

We still have a chance to have our first woman president before the centennial anniversary of women’s suffrage, but on the eve of this inauguration day that historical occurrence seems unlikely.  Friday I will watch Hillary attend the inauguration as the wife of our former president and worry that I live in a country that doesn’t think a woman can take the oath of office.  I will wonder if my father’s adoration and pride in me over the years would have been enhanced if only I’d been a boy, even though that thought seems impossible: he always seemed so proud of me. But he voted for our new misogynist president and I believe he is excited about the direction our country is going.  Is my own bubble more fragile than I ever imagined?  I will worry that my daughter will have to overcome obstacles that I was lucky enough to avoid through pure dumb luck.  And I will hope that the pace of change has accelerated from the late 1800s and we don’t have to wait 50 more years – the duration between black’s right to vote and women’s right to vote – before this country’s prejudice of women ends.  Will my daughter’s granddaughter be the first woman in my family to have a presidential female role model?  Will that far off progeny finally live in a world that I falsely believed I inhabited; a world where men and women are equally respected and valued?  Time will tell.

Got some new electric wheels. ⚡️🚗
It was one of those really productive work meeting days today.