Hi Bloggy friends!  I have missed you, but enjoyed my time away basking in the sun and catching beads in New Orleans.  Our Mardi Gras trip started and ended in Houston, saving us thousands of dollars in flights and allowing us to visit friends and their new baby in Houston.  But what was a person to do with 10 hours of driving? 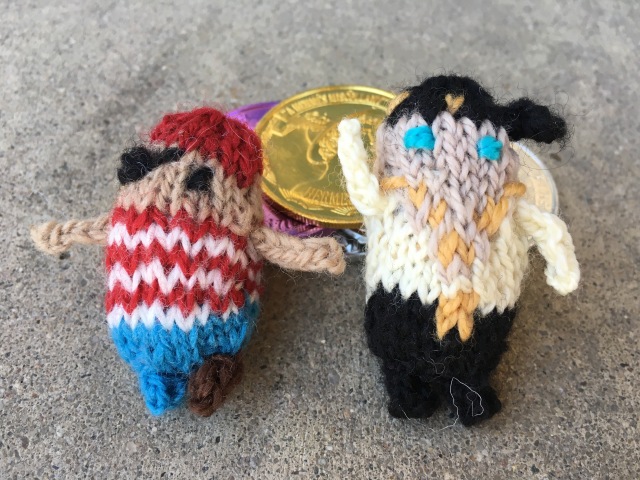 Grandma Afthead has been hinting for a bit that her and Afthead Junior’s “pirate game” would be greatly enhanced by some tiny Mochimochi Land pirates, and I am not one to ignore knitting requests.  Thus, I broke out my newly created tiny-knit-kit during the drive back to Houston from New Orleans and started knitting.  What’s a tiny-knit-kit?  I’m glad you asked!

Before the trip I wound many colors of tiny knit yarn onto embroidery floss spools – I use Knit Picks Palette yarn because it is cheap and comes in a bazillion colors.  Then I raided the few Mochimochi Land kits I’ve purchased for tiny bags of fiberfill.  Finally, I found my favorite needles for making tiny creatures, size 1 Lantern Moon Sox Stix, and threw everything into a small plastic pencil box.  Voila!  Tiny-Knit-Kit: perfect for tiny travel knitting!  My patterns were slipped into sheet protectors and clipped into a plastic two-pocket folder.  The whole thing fit nicely on my lap as we drove/flew along.

See!  It even worked on the airplane after I finished the pirates and started on a tiny knit chicken, because that’s what pirates wear on their shoulders, right?  No?  Oh….  Guess I know what my NEXT tiny project will be.

Let me introduce you to my newest tiny knit friends!  We have Orleans Tinypants and his golden jelly bean.  Orleans is knit from the base Mochimochi land pattern with no modifications.

Then we have Captain Penn Tinypants, who may also moonlight as a gangsta rapper when he’s on shore.  Captain Penn is a modification of the Mochimochi Land Tiny Pirate pattern, and details are on his Ravelry page.  Basically he’s a row taller than the base pattern, has a wicked gold belt buckle and chain, has a debonair white shirt open to the waist, and his glowing blue eyes make the tiny ladies swoon and strike fear into his crew.  He’s also meticulous about his sunscreen use, which is why he’s such an oddly pale pirate.  Way to be skin cancer conscious Captain Penn!

The pirates were thrilled when we got home and they discovered the piles of dubloons and beads from Mardi Gras.  The two of them have relocated with their booty to Grandma’s house and are having a great time.  Grandma has mentioned that she thinks she’s heard the quiet sounds of pirate rap on still nights, but she might be imagining things.

As always, thanks to Anna Hrachovec and her amazing Mochimochi Land patterns!

Abundance.
When I am watching your house and your kid’s betta fish dies I will bury that fishy dude in a grave, under a blooming flower, deep enough so some dog won’t dig him up. I’ll pour the dead fish water on the plant grave while humming “Circle of Life.” Then I’ll rinse out the tank and remove it from your mourning kid’s bedroom, along with all fish accessories. Then I’ll hand-paint a custom gravestone for the poor dead Kevin-fish.